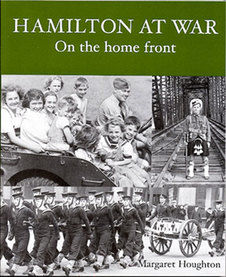 Something amazing happened in Hamilton during the years of the Second World War. That brief period of time from 1939 to 1945 saw the city and its people create something so special that it was unlike anything they had known before.

Never before and never since has Hamilton been so focused on a single goal. They worked together to win the war on the home front and they succeeded beyond their wildest expectations.

Hamilton at War re-lives that exciting time with stories and photographs of the people and places that made the city such a vital example of the best that Canada had to offer.

** Copies of Hamilton at War on our CLEARANCE BOOKS page have COVER IMPERFECTIONS and are offered at a reduced price. The inside pages of the books are in GOOD condition. ** 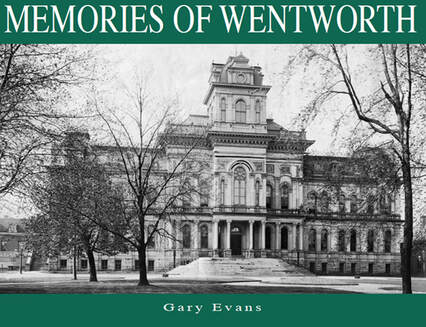 Memories of Wentworth  by Gary Evans

Wentworth County can trace its roots back to 1816 when it was created as part of the Gore District.

As Hamilton grew - it became a town in 1833, and a city in 1846 - it became the dominant population and commercial centre at the Head of the Lake, and with that came its status as the county seat for the County of Wentworth.

The creation of the Regional Municipality of Hamilton-Wentworth in 1973 could have been the first step towards the loss of identity, but that was not to be despite the loss of some political and administrative independence.

Then, in 2001, with the formation of the new City of Hamilton, Wentworth was no more, as the mega-city swallowed up the entire county becoming indeed a super city.

In the 1930s, the little town of Burlington, Ontario, was noted, primarily in the farming community, as a market gardening area. During this period in time, Canada was in the midst of a world-wide depression. It was an unlikely place and an unlikely time for anyone to consider starting a business, particularly a venture into show business.

An impresario named John Murray Anderson saw the potential and turned a site on the shore of Lake Ontario into a nightclub that grew to be internationally renowned. The history of the Brant Inn was recognized within the Burlington Historical Society as a great story that should be fully told and preserved. 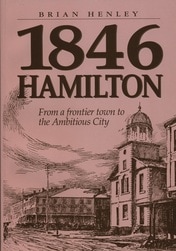 By the spring of 1846, Hamilton was already an "instant city", no longer content to be labelled a town.

So begins the story of Hamilton as it becomes a city. 1846 HAMILTON paints a vivid portrait of the community as it evolves from a rough and ready frontier town into the Ambitious "Little" City.

Noted historical writer Brian Henley tells of the fierce newspaper wars, the muddy streets, the disastrous fires and the beauty of the emerging community in this collection of stories from the mid-1840s.

1846 HAMILTON is a journey back in time, back to a time when events helped shape the Hamilton of today.
** Copies of 1846 HAMILTON on our CLEARANCE BOOKS page have COVER IMPERFECTIONS and are offered at a reduced price. The inside pages of the books are in GOOD condition.
Online Price: $8.95
OR - PICK UP BURLINGTON 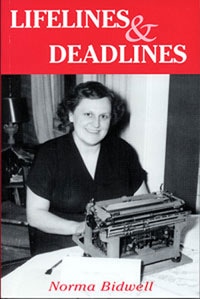 Norma Bidwell has been associated with the Hamilton Spectator for more than 50 years, delighting readers with her treasured recipes, sharing her passion for cooking with countless readers over the years.

But Norma is also an accomplished storyteller, and over the years she has jotted down notes in her little blue book, not only notes about her years at The Spectator, but those precious times with family, those wonderful trips to the cottage, and bit and bytes about life with a computer.

In Lifelines & Deadlines, Norma converts those notes to a fascinating collection of stories filled with warmth, humour and emotion as she writes about juggling family life with the demands of a daily newspaper.
Retail: $17.95   Online Price: $8.95
PICK UP - BURLINGTON 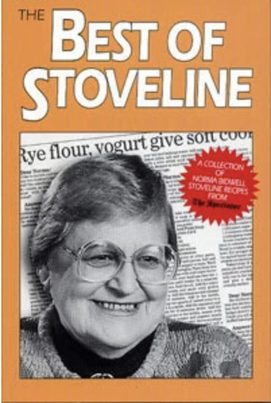 The Best of Stoveline by Norma Bidwell

​When Norma Bidwell retired from The Spectator in 1980 she did not retire from writing. Instead, she launched into a new phase of her career writing a weekly food column which is one of the most popular features of The Spectator.

Over the years Norma has answered thousands of questions from readers searching for a special recipe, many of them nostalgic in nature.

Her readers remember those tantalizing recipes from childhood - those zesty soups, creamy puddings, towering layer cakes, stick-to-the-ribs stew - mouth-watering recipes which all too often were never written down.

The Best of Stoveline is a collection of those special recipes - treasured recipes from her own files and also delectable treats supplied by readers.
Online Price: $12.95
or - pick up Burlington 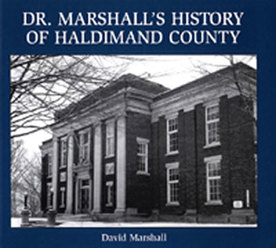 It's a county rich in history, one which values its heritage.

The county is Haldimand, and for those living here today, it's a piece of paradise.

Serene, picturesque, Haldimand County has always been one of the great places to live. It's far from the maddening crowds, nestled along the quiet waters of the Grand River as it flows through historic towns and villages on the way to Lake Erie. 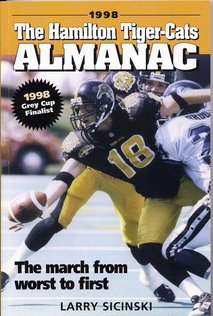 This book is an armchair quarterback's guide to football in Hamilton as an insider takes a look at the Ticats' march from worst to first.

Complete 1998 coverage from the draft to training camp to game-by-game reports.

(a few of the books are signed by author Larry Sicinski and either Darren Flutie or Danny McManus!)


These books are available for ONLY $2.00!! (limited quantities)