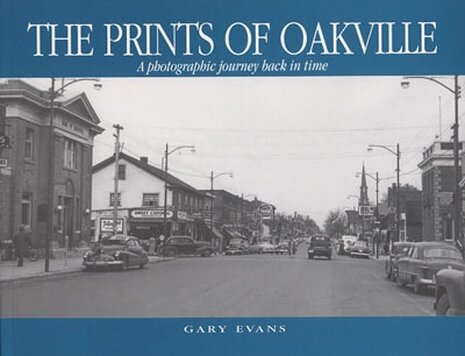 THE PRINTS OF OAKVILLE
By Gary Evans

There is something very special about Oakville, a community nestled on the shores of Lake Ontario, a community which was incorporated in 1857, but with roots going back long before then. It's also a community in transition, one which incorporated many smaller communities over the years so that today, while it experiences phenomenal growth, Oakville has retained its quaint charm of another era.

There is a series of photographs taken on Colborne Street - better known today as Lakeshore Road - showing retail establishments long gone as well as other shots of historic houses, the harbors in transition, and Rebecca Street of long, long ago.

A series of aerial photographs, some dating back more than 40 years, provide a different glimpse of Oakville, offering a unique perspective of the downtown core. Then marvel at the old schools, the Middle Road and the bustling community of Palermo, and even an antique car display at the Ford plant.

As you leaf through The Prints of Oakville, an Oakville of another era will come alive, one rich in tradition, one as seen through the eyes of photographers.