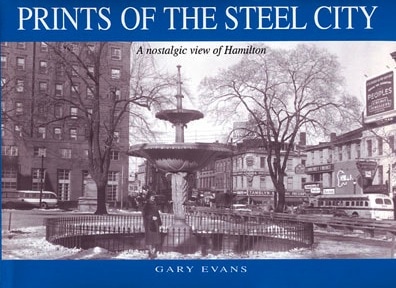 Prints of the Steel City  by Gary Evans

When one thinks of the historic cities in this country, it is seldom that the city of Hamilton is on that list, and yet, it is such a historic city.

Few cities in Canada can boast of having an incline railway, whereas Hamilton had two scaling the face of the escarpment. Or a Mountain, which offers panoramic views out over the city.

Then, there's a castle, right at the edge of the bay, and on the other side of the waterway, the Beach Strip community fondly remembered by those who spent time enjoying the amusement park, or the beaches.

But with this history comes nostalgia, longing for the days when the inclines were running, the beaches were swelled with day-trippers, and carnivals were set up in the Market Square.

Prints of the Steel City offers a nostalgic look at Hamilton from back then, a Hamilton fondly remembered through the images of old photographs.
Retail: $19.95  Online: $16.95
SOLD OUT!
sold out!