Images of Burlington is also filled with memories, memories of a different sort of city, when the sounds of the Brant Inn could be heard along the lakeshore, or when traffic crawled along the beach highway, long before the opening of the Skyway Bridge. Plus there is a series of aerial photographs, taken many decades ago, photographs which offer a unique perspective of how Burlington has grown over the years.
$19.95
PICK UP - BURLINGTON 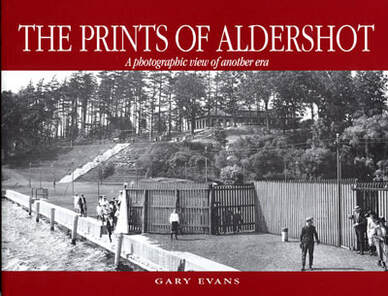 The Prints of Aldershot is a fascinating rare collection of old photographs, photographs which will stir up a lot of memories.
$19.95
PICK UP - BURLINGTON 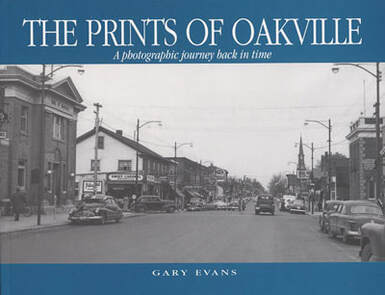 THE PRINTS OF OAKVILLE
by Gary Evans

There is something very special about Oakville, a community nestled on the shores of Lake Ontario, a community which was incorporated in 1857, but with roots going back long before then. It's also a community in transition, one which incorporated many smaller communities over the years so that today, while it experiences phenomenal growth, Oakville has retained its quaint charm of another era.

There is a series of photographs taken on Colborne Street - better known today as Lakeshore Road - showing retail establishments long gone as well as other shots of historic houses, the harbors in transition, and Rebecca Street of long, long ago.

A series of aerial photographs, some dating back more than 40 years, provide a different glimpse of Oakville, offering a unique perspective of the downtown core. Then marvel at the old schools, the Middle Road and the bustling community of Palermo, and even an antique car display at the Ford plant.

As you leaf through The Prints of Oakville, an Oakville of another era will come alive, one rich in tradition, one as seen through the eyes of photographers.
SOLD OUT! 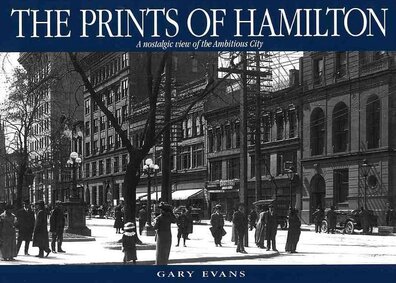 THE PRINTS OF HAMILTON
by Gary Evans

It is known as the Ambitious City, a city with strong links to the past but with a view to the future.

It's a city with unparalleled beauty, a city where huge steel mills provide a backdrop to the waters of Burlington Bay, a city with a mountain, and beautiful gardens.

The Prints of Hamilton is a fascinating rare collection of old photographs, photographs which will stir up a lot of memories, and open the doors to the city's history.
$19.95
PICK UP - BURLINGTON 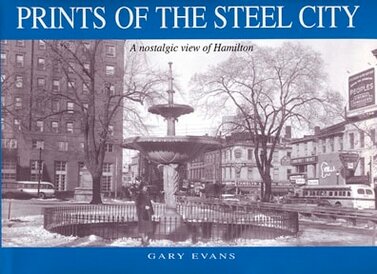 PRINTS OF THE STEEL CITY
by Gary Evans

When one thinks of the historic cities in this country, it is seldom that the city of Hamilton is on that list, and yet, it is such a historic city.

Few cities in Canada can boast of having an incline railway, whereas Hamilton had two scaling the face of the escarpment. Or a Mountain, which offers panoramic views out over the city.

Then, there's a castle, right at the edge of the bay, and on the other side of the waterway, the Beach Strip community fondly remembered by those who spent time enjoying the amusement park, or the beaches.

But with this history comes nostalgia, longing for the days when the inclines were running, the beaches were swelled with day-trippers, and carnivals were set up in the Market Square.

Prints of the Steel City offers a nostalgic look at Hamilton from back then, a Hamilton fondly remembered through the images of old photographs.
sold out! 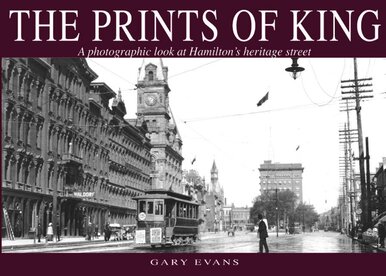 The photographs show a vibrant street, one which has evolved over the years, one filled with memories.
$19.95
PICK UP - BURLINGTON
Look inside.... 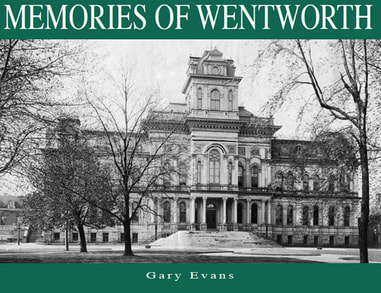 Wentworth County can trace its roots back to 1816 when it was created as part of the Gore District.

As Hamilton grew - it became a town in 1833, and a city in 1846 - it became the dominant population and commercial centre at the Head of the Lake, and with that came its status as the county seat for the County of Wentworth.

The creation of the Regional Municipality of Hamilton-Wentworth in 1973 could have been the first step towards the loss of identity, but that was not to be despite the loss of some political and administrative independence.

Then, in 2001, with the formation of the new City of Hamilton, Wentworth was no more, as the mega-city swallowed up the entire county becoming indeed a super city.

And yes, they all live in Hamilton today, but try telling that to the loyal residents of those historic communities clustered around the Head of the Lake. For them, they’re still at home in Wentworth County.
$21.95
PICK UP - BURLINGTON

PRINTS OVER HAMILTON
by Gary Evans

Prints Over Hamilton is filled with nostalgia, a book that offers readers a chance to explore the city from a most different perspective.
$19.95
PICK UP - BURLINGTON 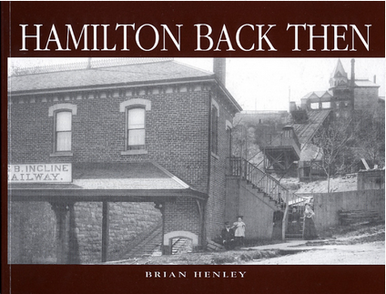 HAMILTON BACK THEN
by Brian Henley

Hamilton Back Then provides a vibrant look at a city of another era, a city proud of its heritage.
sold out!